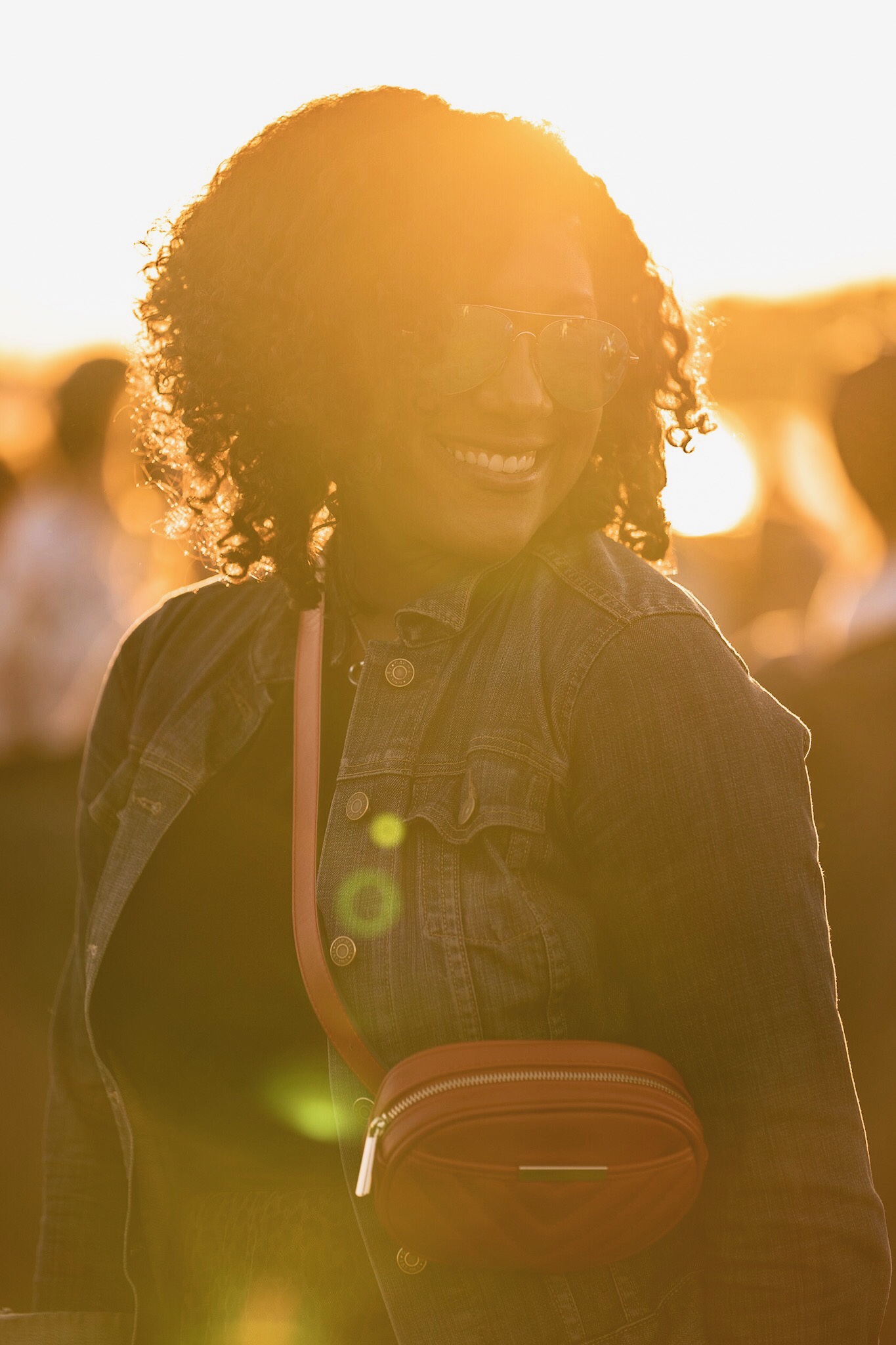 I’ve been a Memphian all of my life, with the exception of my stint in NOLA. Although I’ve attended some Memphis in May activities, I’ve NEVER been to music fest.  Memphis in May (MIM) is a month long celebration that honors a specific country each year and features many different events.  This year since it’s Memphis’ 200th birthday, Memphis is the honoree.  There’s an International Week and a host of other cool events throughout the month.  The first weekend in May is always dedicated the Beale Street Music Festival (BSMF), where many national and local bands and artists are showcased over the 3 day weekend.  Of course, we are known for the World Championship Barbecue Cooking Contest (BBQ fest) happening this weekend (the 3rd weekend). 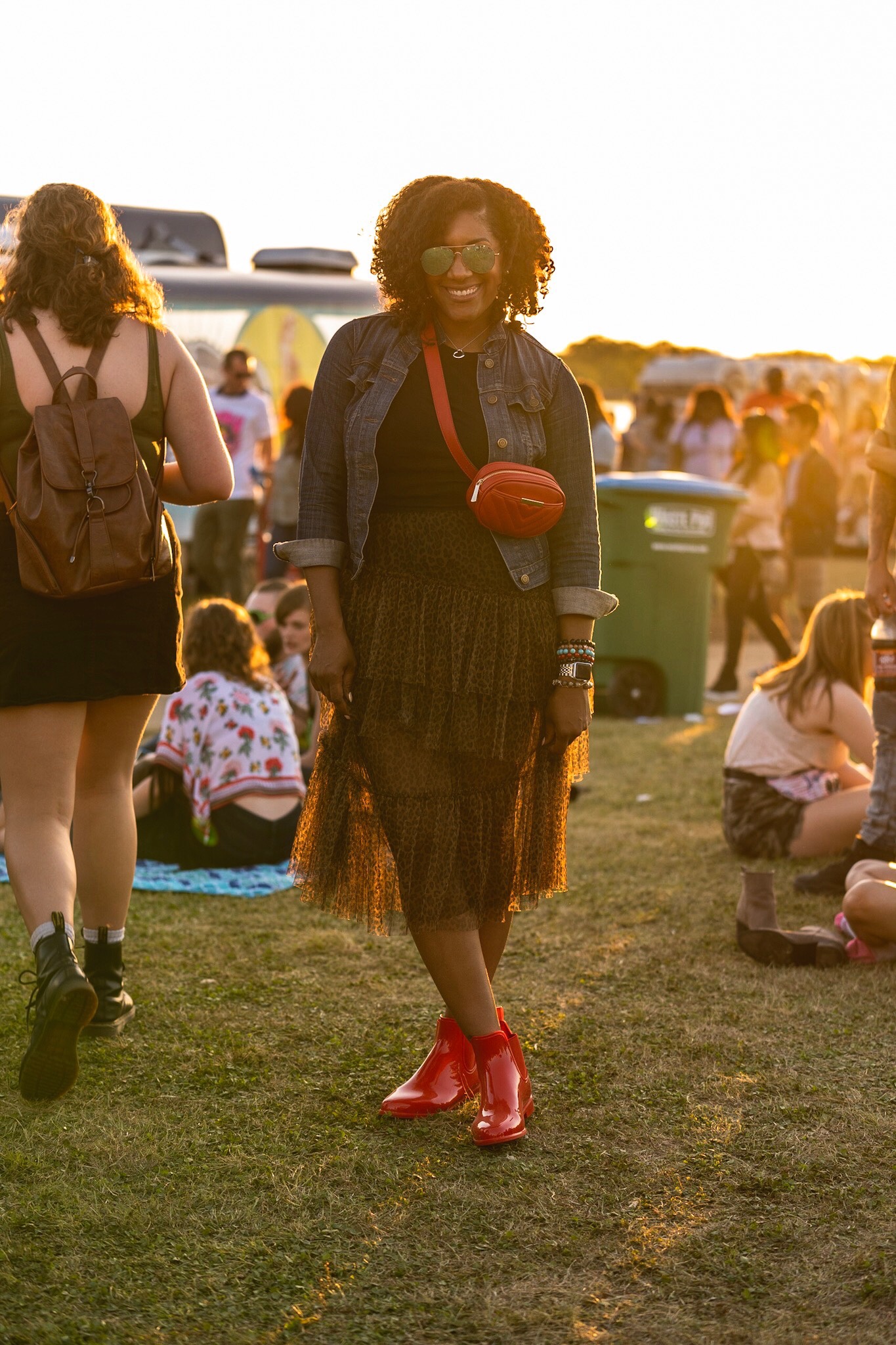 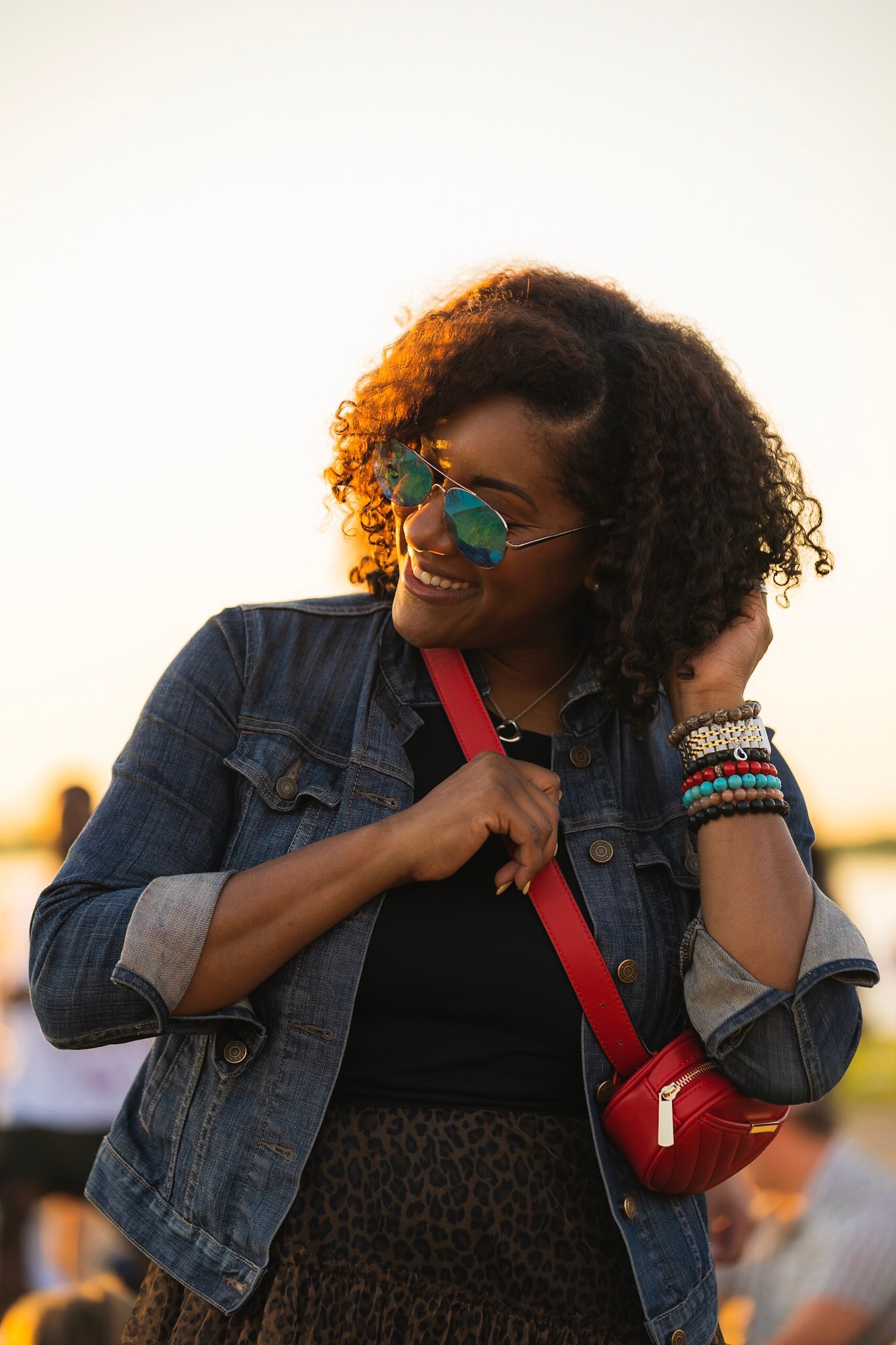 I’ve never really wanted to go for a couple of reasons.  The main one is rain.  It rains the first weekend in May EVERY SINGLE YEAR! Like clockwork.  So much so, the music fest has been affectionately nicknamed Music and Mud Fest.  For years rain boots and ponchos have been style staples, and I just wasn’t excited about listening to music in a downpour. I don’t like mud either. And then you know there’s the hair situation.  It just seemed to be more of a hassle than it was worth.  Another reason was the lineup.  In the past, there hasn’t been much diversity.  No one I truly wanted to get muddy for.  However, this year was an entirely different story.  There were quite a few acts I wanted to see, so I thought I’d brave the rain and mud and see what the BSMF was all about.  I mean, YOLO, right?  And I’m so glad I did.  Friday was a wash, literally.  It was actively raining the whole night and I was kind of tired, so I missed out on The Dave Matthews Band (who I hear gave an awesome 3 hour show).

SATURDAY CONCERT WISHLIST : Big Boi (Outkast), India Arie, and Charlie Wilson.  I hadn’t ever seen any of them in concert before and I was really excited.  There was also Blocboy JB, but I only know the one song and decided to let the young people have it.  The rain I was so worried about was merely a drizzle that stopped soon after we got there.  But before it stopped, I received tons of compliments on my raincoat (including lots of DMs).  The story behind it is simple: I didn’t want a regular poncho.  So I went on the hunt and found something that I though was unique, pretty cute, and one I wouldn’t mind wearing again. (Get it HERE; it comes in quite a few different colors and includes a little pouch).  I kept my outfit was simple because of the rain: striped dress, leggings, and Hunter boots. Red belt bag & red lip added a splash of color (IG pic). Y’all, I had THE BEST TIME Saturday!!! Singing along with Big Boi made me relive my 90s and 2000s. Wish 3000 was there though.  India put on a good show and debuted some of her new songs.  Do yourself a favor and listen to ‘Steady Love’ and “Good Good Trouble’.  Some real grown woman ish right there.  And UNCLE CHARLIE!!! Y’all.  I had never seen him perform live before and his show was like an old school party! We danced and sang all night long! I heard Miley Cyrus dropped in, but I didn’t see her. 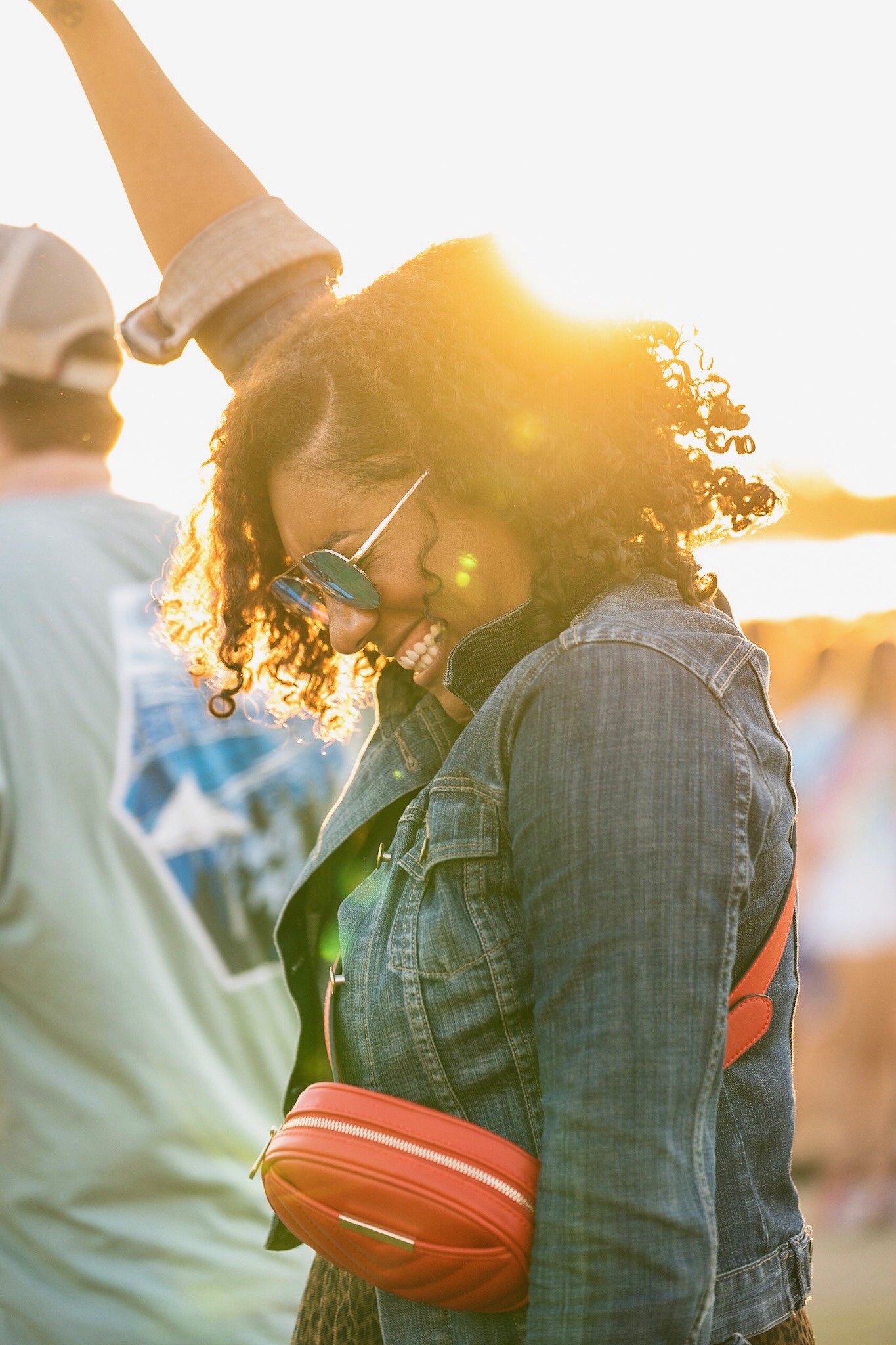 SUNDAY CONCERT WISHLIST : Cardi B!!! I’m not a superfan but she is one of my guilty pleasures when I want a good ole’ ratchet, trap turn up.  I love that she represents for the ladies, and I love her features on other songs.  Plus, when would she come to Memphis again? Probably never.  So here we go.  Everyone in Memphis was out to see Cardi.  It was overwhelmingly crowded. Very different vibe from Saturday night. I didn’t like that.  The THOTS and all of their synonyms were OWT.  Their stomachs and guts (there is a difference you know) and butt cheeks were out, too.  It was a haven for side eyes and “girl, where are you going?” all night long.  Didn’t like that either, but nothing I can do about it.  I had some good laughs.  At them not with them.  You look ridiculous hunny.  Anyways, we got there quite early to get a “good spot” but because we sat/stood around for so long, it was almost tiring.  We were kind of over it by the time Cardi’s set started.  LATE. About 45 minutes late to be exact.  Her energy left much to be desired but maybe I’m just too old and because of the “crowd” we didn’t want to be super close.  Her set was less than an hour and the flow was terribly disjointed.  She stopped to talk after every song.  Listen, ma’am.  I didn’t come to hear you talk!! Sang the songs like you’re supposed to sang ’em. Rap ’em. Whatever.   I sang along, but I can’t say Sunday was all that fun, aside from the fact that i was with my girls (y’all know the Talls & Smalls always have a good time together). I wanted to see Gary Clark, Jr., too, but he was all the way on the other end and didn’t want to risk losing my little spot.  I was cute though.  I wanted a true festival look, but not naked like some of y’all’s friends. <insert eyeroll>  This skirt was perfect (leopard + tulle = heaven) and because it was still a little soggy, these boots were too.  I already had the tee, jacket, and belt bag.  I mixed a little something old with a little something new, and I love how it turned out. 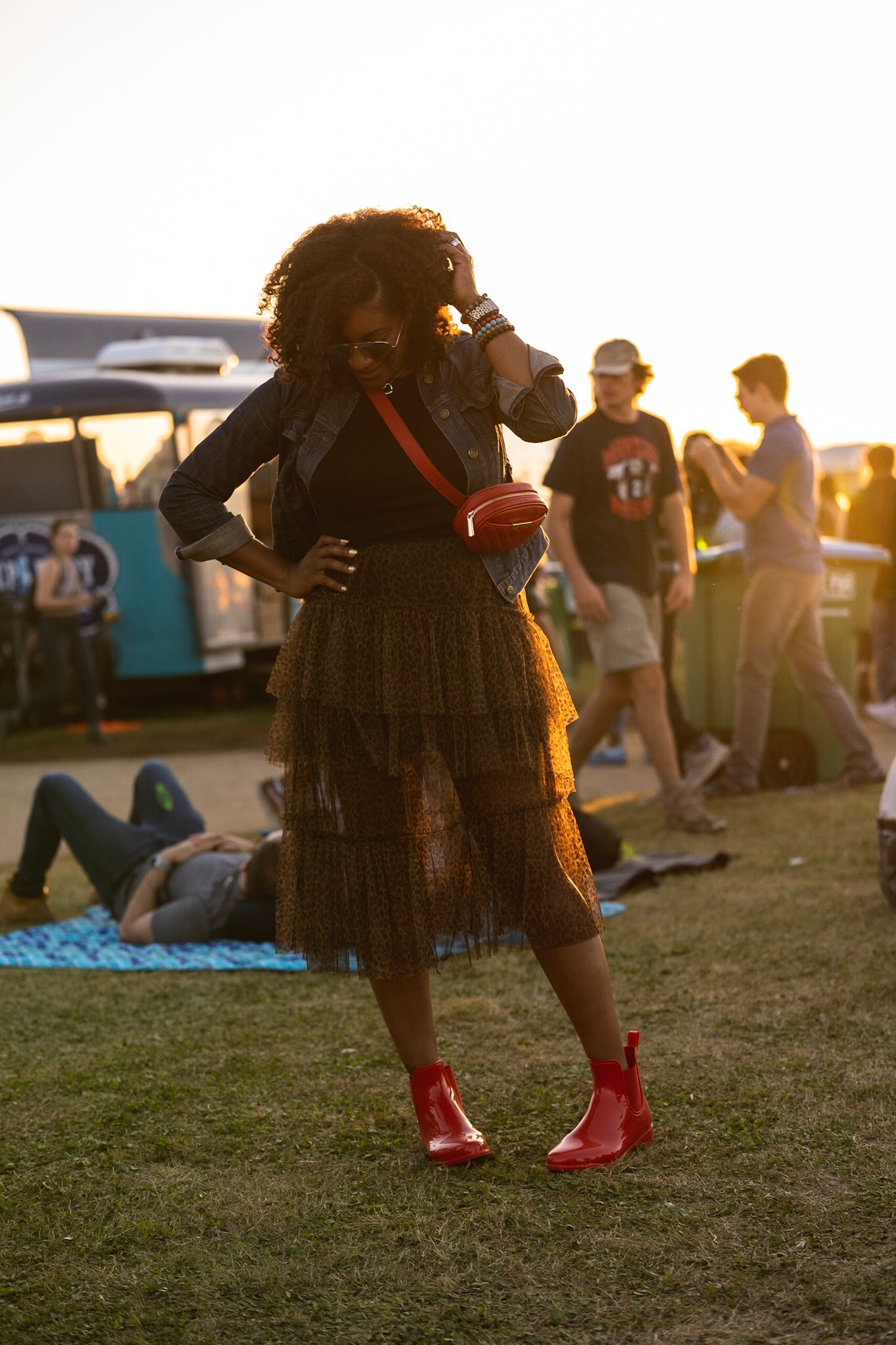 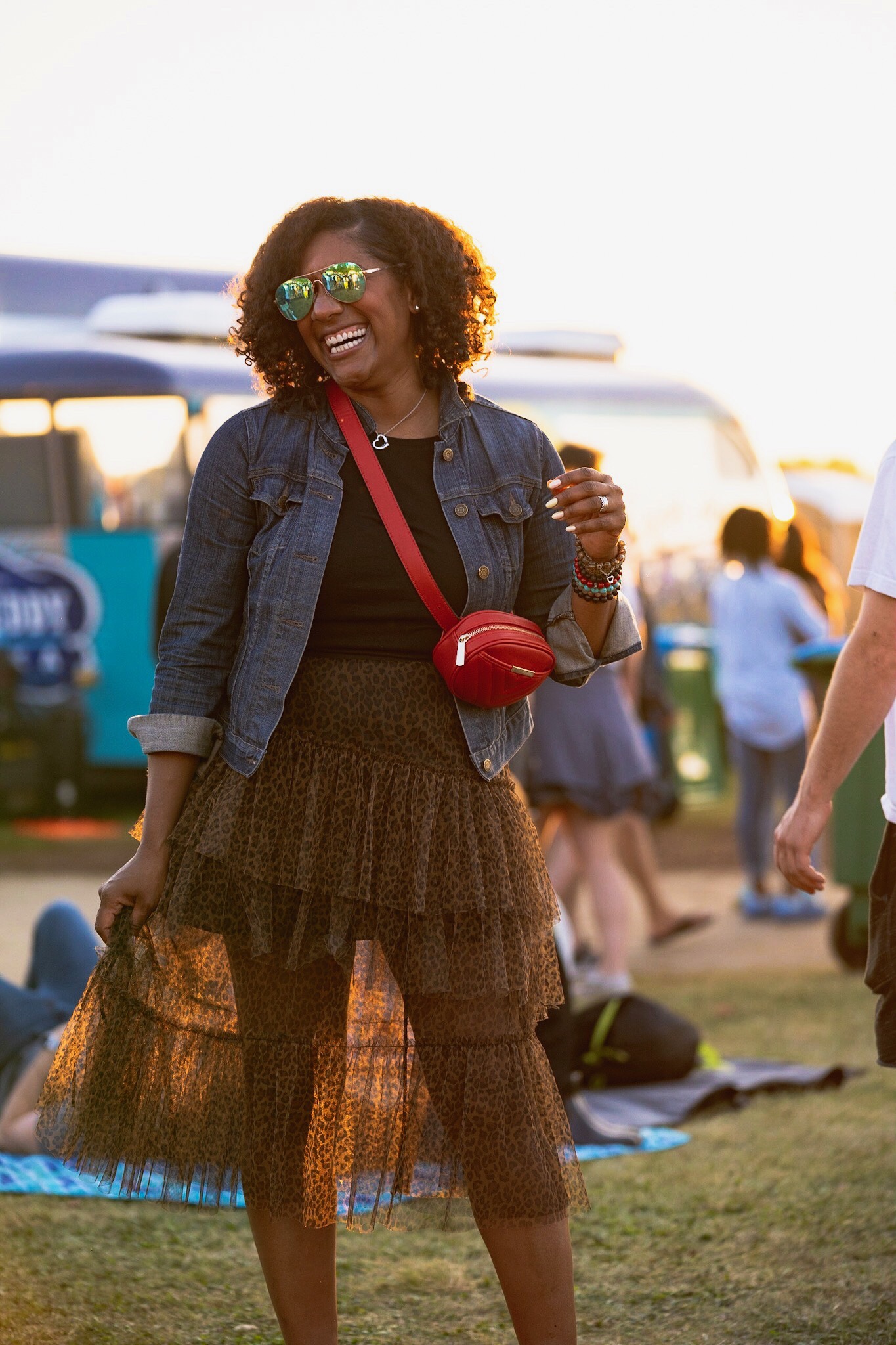 According to Q, BSMF was actually fun!! You can’t beat multiple concerts in one place.  Once I got over the whole rain/mud issue, I was open to doing something different and enjoying the moment.  Preparation was key! I even had my waterproof pouch for my phone if I needed it.  The lesson in this: don’t let minuscule things get in the way of a good time and making memories.  YOLO!!!

Cheers to my first BSMF and maybe a few more to come!